Eccentric Orbit - Creation of the Humanoids (2014) 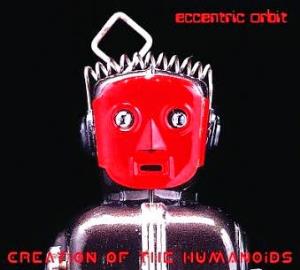 The music here is entirely instrumental as you may have guessed by the lineup.

I very much liked their 2004 debut album Attack Of The Martians. Good, eclectic symphonic prog. It was also a pretty much new type of progressive rock, too.

The band returned ten years later with another take on eclectic symphonic prog. And.......

The electric violins reminds me about both Jean Luc Ponty and the many Japanese bands who use electric violins to great effect. The bass is hovering around the zeuhl and avant-garde genre.  The keyboards are sometimes operating in the 1970s symphonic prog territory with some Moog and Melotron sounds and soundbytes.

The music..... It is very synthetic and has a plastic fantastic feel. Which is the whole concept behind this band. A concept of alien and alienation.

The music is not particular good and I have put off this review by a year or so. Basically because I thought this album was too cheesy to be reviewed. It is very much a cheesy fifty minutes long album. Cheese and plastic goes hand in hand here. The bass, keyboards and the electric violins is saving this album from a grave.....well, not so bad review. Some of the melodies are also good. But this is far too much cheese for me. On reflection, cheese is not my favourite food. Neither my favourite music either.