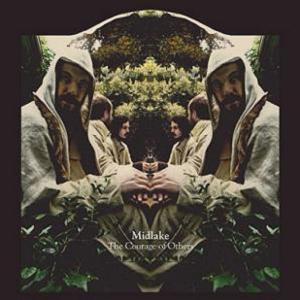 Midlake was a five piece band on this album with a lineup of guitars, bass, drums, flute, piano, keyboards, dulcimer, autoharp and vocals.

I really loved their 2006 album The Trials Of Van Occupanther. An album with a very strong The Beatles reference and sound.

Midlake is still very much a folk rock band. A very much downtuned band where less is more.

The less is more ethos very much applies to this album. Stripped down is the overtly The Beatles references. They are still here. But not so obvious.

What remains is a darker, more melancholic and somewhat a more psychedelic folk rock album. It still has some Jefferson Airplane references too. But this is essentially folk rock with a twist. Folk rock with very strong English references. Not so much US and Americana references.

Tim Smith's vocals is again pretty central in their sound. They are pretty eerie and brooding. Which very much adds quality to this album.

This album is not as good as their 2006 album The Trials Of Van Occupanther. There are not much greatness here. It is still a very good album. All the forty minutes of it. It also very much pushes the folk rock envelope and adds a lot of value to this genre. I love that !!