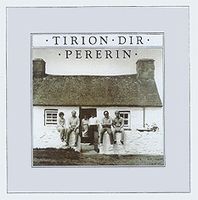 The third album from this Welsh band.

Pererin was a five piece band with a lineup of various acoustic strings, guitars, flutes, percussions, bass, keyboards and vocals. Welsh vocals, that is. Both male and female vocals. But the vocals is dominating male vocals and some pretty gentle ones too.

These album was not traditional folk rock albums, but folk rock albums with a Keltic and Welsh dimension. Some years later, the likes of Mostly Autumn developed their music and this scene and came up with a winning and very good formula. That though was in the future.

Tirion Dir and 1982 is the present here. This album is forty minutes long and it has a couple of very good songs and a couple of not so good songs. There are ten songs altogether and some is stretching themselves towards six minutes. The average is off course four minutes. Which is pretty long for folk rock songs.

There are some hints and gentle pointers towards progressive rock on most songs. The songs are mostly very melodic and has a bit of a hymn feel to them.

The overall quality is good and I like this album a lot. Pererin has got my respect, yes. Fans of folk rock must check them out.