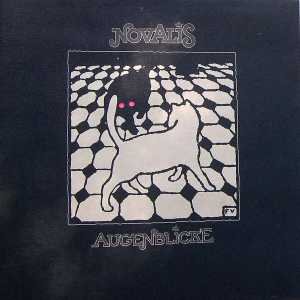 Novalis was a five piece band on this album with a lineup of guitars, synths, bass, drums, flutes and German vocals. Male vocals. Pretty good vocals too.

Novalis has some good albums and some not so good albums behind them. This band was a bit of an oddball in the scene with their mix of symphonic prog and krautrock.

On this album, they have understood that the symphonic prog and the krautrock scene is dead. Releasing albums like that was as socially acceptable and popular as releasing plague. So they did not bother.

What we get instead is German rock of some sort. Oddball rock, it is. It is not krautrock, though. There are still some psychedelia in their music though. So they are sailing pretty close to the krautrock genre here. But not close enough.

This album is thirty-six minutes long and it is not the most interesting album I have heard. Not this year and not today. It is a pretty dull album with a mix of uptempo songs and ballads. It is the German way, though.

This is a decent enough album, but would only appeal to those who want everything. Loonies like myself. And I am not the smartest person around. The smarter ones of you can bypass this album.