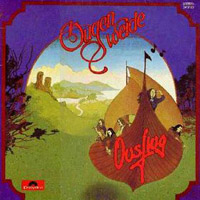 Ougenweide was a six piece band with mainly acoustic instruments. Both strings and woodwinds. The only electric instruments here is electric guitars, bass, keyboards and synths.

.... Which is too much electricity compared to their previous albums.

The band is mainly a medieval folk music band. That with lots of flutes and acoustic instruments. The vocals are also in the olde German language. My German is pretty good and most of the lyrics here are 200 years before my time and age. Which is great.

It is obvious that the band has moved with the times and taken a wrong turn in the process. The electricity has added a very much unwanted dimention to their music.

The lack of any good songs does not make this album any better either.  So the band has added some nonsense to this album to mask this deficency. Children rhymes and the likes of that. It does not work and I can see right through this nonsense.

By all means, this is a decent enough album. But it is not as good as their other albums. Which is a great shame.