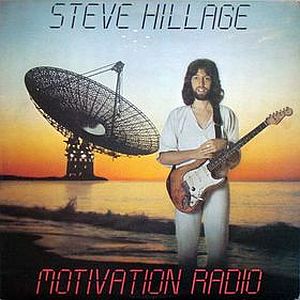 The third album from this English artist.

Steve Hillage was the ex guitarist of Gong, Khan and Uriel before he went solo and had, and still have, a pretty good solo career. He is a living legend in his own right.

His first two solo albums was pretty hard rocking and much more straight than I expected from an ex Gong guitarist. Which perhaps his two hits Hurdy Gurdy and The Salmon Song explains.

There are no hits on this album though. Instead, we get a mix of hard rock/psych and Gong like melodies. Yes, Steve Hillage has returned back to his Gong days on this album.

You get some straight songs. Twisted, but still straight. Then you get some weird spaced out tunes here too. There is some electronica here and I guess that this is where Steve Hillage first started to explore these avenues. Avenues pretty dominant on his later albums.

The end result is a spacy album which takes in a lot of Gong and the psychedelic soundscapes from that era. Some songs are straight. Some are spaced out.

The end result is a good album. Barely a good album as this is not a solid good album. It does not really have any great songs or some standout tracks. But the more weird stuff is the best here. Check it out.