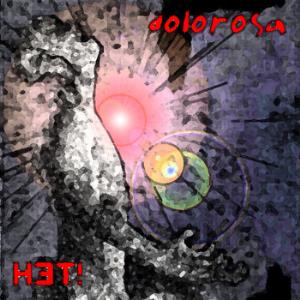 The debut album from this two men big French band and a free download too.

Dolorosa claims to play zeuhl. Well, they are pretty similar to Shub Niggurath on their Testament album. And that is not a compliment, btw. Dolorosa's music is more leaning towards a mix of acoustic and electronic hypnotic music. There is a lot of loops here. Most of the album is loops. Loops and pretty one-dimensional where the emphasis is on creating a Shub Niggurath like darkness. They succeeds in that.

This album is in short not a good album for those who want variations and organic music. This is not a hopeless album though. I understand where the band want. The music is avant-garde and that to the extreme edge of that scene. Ditto for this album. I hope Dolorosa develops their concept and moves more into proper zeuhl and avant-garde instead of plodding around with tape loops like on this album. A decent award is handed out.