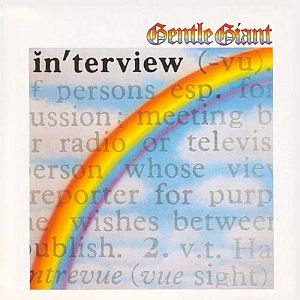 The eight album from these masters of eclectic prog.

Their previous album, FreeHand, was a great album and one of the best eclectic prog albums I have ever had the pleasure of listening to. Lush, choral choir based melodies with the usual Gentle Giant twist. Interview is another side of Gentle Giant, though. The band was greatly disillusioned by the music business by that time. I guess the question "how would you describe your music ?" is a question that irked them. Gentle Giant was always all about breaking barriers and carving their own musical path. Interview is loosely a concept album based on their disillusionment about the business, centered around an interview.

The concept is brilliant and I understand them. Unfortunate, the music is not that great. The Gentle Giant trademark still shines through though on all the seven songs. The title track and a couple of other songs is very good. There are also some not so impressive songs here. The closing song I Lost My Head is Gentle Giant going commercial pop and by far the weakest song here.

Interview is by no means a great Gentle Giant album. I have made no secret of my admiration for this band and their sound. It is a very good album in my estimation although it is pretty low on my list of Gentle Giant album, quality wise. It is still well worth checking out.