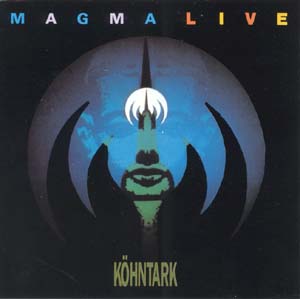 The first Magma live album, according to ProgArchives.

I have heard a lot good about Magma live albums and has indeed purchased all of them. I have yet to listen to any of them, saving them up for later and reviews like this.

Magma is more in a funky mood on this album than full frontal zeuhl as on their first albums. Not as disco as on Merci. But still more funky jazzy than zeuhl. The music is pretty understated and not as bombastic as I was hoping for. Maybe this live album is a one off funk parade from the band. Maybe I am in for some more zeuhl related music on the other live albums.

Anyway.... The result is still a very good live album with some very good music. Eighty minutes or so with very good music. I also likes their more funky albums and get what I paid for here. The music is perhaps a bit too one dimentional. It is, actually. This is still a good live album from Magma which should interest their fans. I am one of them. I am a fan of their more full frontal zeuhl though. Anyway...