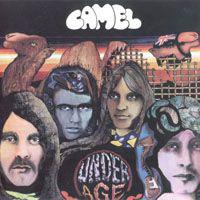 This is not the Andrew Latimer fronted English symph prog band. This is the other Camel. It also came from England before emigrating to Italy and then disappear without a trace.

Musically, these two Camels could not had been more different either. This Camel sounds like a crossbreed between Bad Company, the Who and Led Zeppelin. Raw hard rock rooted in blues in other words. It also has this early 1970s sound too and some screaming bluesy vocals. The right stuff for a perfect party in other words and this album would go down well in a party even in 2013. Timeless music in other words. Music other bands does even today. In particular cover versions of Pineball Wizard which starts this forty minutes long album.

The sound is OK and the music decent throughout. Not bad and not great. Go down to your local pub and you will probably find bands doing this kind of music there, playing for a handful of people. That is as original as this music is. Under Age is a decent album though.