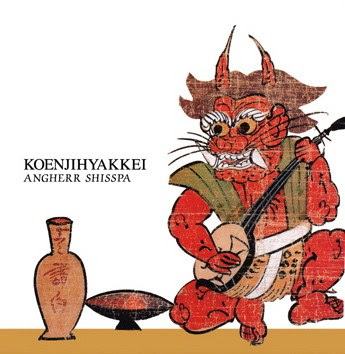 The fourth and so far final album from this Japanese band.

Koenjihyakkei has been described as Magma on caffeine. They were that on their first two albums. That and deeply impressive. Their use of twin female vocals, male vocals and jazz instruments creates a heck of a sound. One heck of a big sound. Their first album Hundred Sights Of Koenji is still one of my favourite zeuhl albums. It was zeuhl on caffeine, straight in my face and I could hardly breathe. Great stuff.

Angherr Shisspa is a bit of a different album. Most of their bombastic speed and aural onslaught on the listener has gone and been replaced by some more subtle Magma like zeuhl. There is still enough of the old Koenjihyakkei to really interest me. But they have changed a bit. The female opera vocals is still here and so is some dissonance too. The madness remains. Great madness, btw. Insanity at it's best.

There is no really great songs here throughout these fifty minutes. That said, the sound is great and the band still delivers one heck of an assault on the senses. This is not easy listening by any sense and it is still a bit more left field than even Magma was at their best. Check out this very good album.