Hostsonaten - The Rime Of The Ancient Mariner Chapter One (2012) 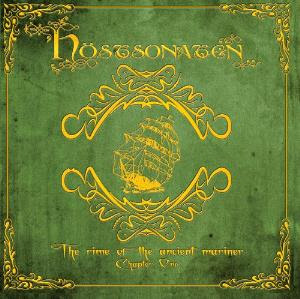 The seventh album from this Fabio Zuffanti fronted band.

That aside, Hostsonaten is his Scandinavian symph prog band. Named after a great Ingmar Bergmann movie, it goes without saying their music is melancholic Scandinavian. I am not sure if Fabio Zuffanti has got this feel from his presumed many visits to IKEA. But he has really got this almost as good as Anglagard did.

The Rime Of The Ancient Mariner is off course this very famous poem by Samuel Taylor Coleridge. I remember Iron Maiden's fifteen minutes long version of the same poem on my favourite heavy metal album Powerslave and was curious to hear Hostsonaten's take on the same poem.

First of all; they came from the exact opposite direction from Iron Maiden. Hostsonaten's version is very pastoral and symphonic. No power chords here. The mellotrons and moog gives the music a great, ancient feeling. It is like being back to 1797-98 when this poem was written. The very melodic guitars serenades here gives the poem some extra power too. Bass, flutes, drums, male and female vocals plus some other instruments adds extra power to the words. Words sung by five different vocalists. All of them flawless.

There is a bit of a power metal drama in the middle of this one hour long album. An album dominated by one theme and one melody. That interlude is needed and adds value. The main theme and melody is great and makes this a great album. In short; this is a great album which I really love.