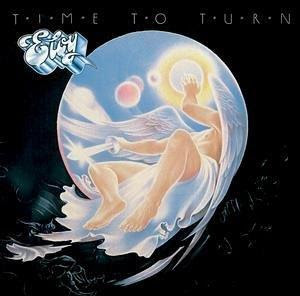 Time To Turn was released at the time when every prog rock and krautrock band tried to become more commercially accessible. Prog rock was more or less dead already. Light hearted pop and AOR was the only show in town. This was indeed the dark ages of the mankind.

To a large degree, Eloy has always had some pretty strong Pink Floyd influences. On this album, the band tried to emulate their more commercial accessible material and really went for it. The songs are pretty short and very melodic. They still retains the good old Eloy qualities and there is a lot to enjoy for the Eloy fans here. Their concept and mood sound like for example on Dawn has gone on this album though.

Time To Turn is a relative easy accessible album where Eloy has turned of most of their space machine and gone a bit commercial. They sound a lot like Pink Floyd at their most commercial. There is no really great songs here though. Nevertheless, Time To Turn is ticking over nicely throughout the forty-two minutes it lasts. I like a lot of this album.