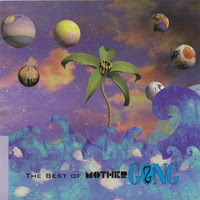 The best of this Gong splinter group.

Mother Gong existed between 1979 and 1994. It was set up by Daevid Allen's wife Gilli Smyth and Hari Williamsen. Daevid Allen only appeared sporadic on their 11 albums and 3 live albums. Yes, they also played on the Glastonbury festival several times. The band is now a part of Gong again. That is all I know about Mother Gong. Let's say that the whole Gong family, who counts tens of people, was a very creative family who released many, many albums under many different names.

Mother Gong is pretty true to the psychedelic drop out jazz sound Gong is famous for. They stayed true to this formula during their fifteen years together. Gilli Smyth's vocals is everywhere and ditto for the quirky lyrics.

Everything depends on how much you like this band as this is a good summary of what they were up to. It is said to have the best songs from their best albums. This album is seventy-five minutes long and offers good value for money if this is your type of flying teapots. But get some of their albums too.