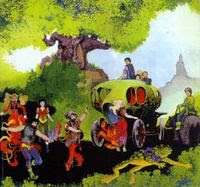 The real debut album from this Danish band who released one album under the name Rainbow Band before changing their name to Midnight Sun and releasing three albums.

Actually, this is the Rainbow Band album with different vocals. The RB vocalist was kicked out and another lucky man got the slot and this album instead. Strange, but they did it anyway.

Their style can best be described as a mix of blues, rock and jazz. Scandinavian kind of fusion between these three music styles. I would call it proto-krautrock. The Danes are not that happy about their neigbours in the south so I think I will leave it like that.

There is a lot of saxophones, Hammond organs, vocals, bass, drums and guitars here. The sound is lush. The music is rather dated and very bluesy. This is not really my cup of tea and I don't really find any good songs here. This is nevertheless a decent album.