Elephants Of Scotland - Execute and Breathe (2014) 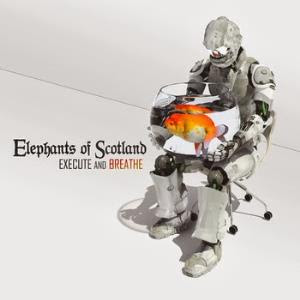 I thought the band was pretty gimmicky when they appeared with their first album. It had a great cover and band name. The music was also good. But I still had my doubts about the band. I was not sure if the band was a serious band with musical aspirations.

...Doubts now erased. The joke is now on us doubters. The band has not made it easy for themselves with a highly tricky choice of direction. Neo-prog with keyboards, guitars, bass, drums and vocals is not an easy way out. The scene is pretty much overcrowded too. You really have to be great to make headway here.

And this band has managed to come up with a very good album where the only gripe I have got is the lack of a killer track or two. Besides of that, fifty minutes with this album times many times is very enjoyable. Yes, they are a bit of a middle-of-the-road band. Their enthusiasm and skills on their instruments shines through too. That they sometimes sounds like Rush does not harm them either. I think this band can go far. I really like this album.