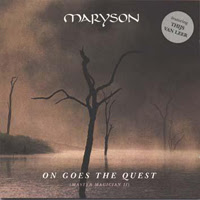 The second and so far the final album from this Dutch band.

We are back in melodic prog land again. Some sort of neo-prog to be more precise. This band is the vehicle of William Maryson. He does the keyboards and vocals here. Thijs Van Leer from Focus is guesting as the flute player here too. The band itself is a five piece band with bass, drums, guitar and keyboards. A female vocalist is also guesting here in addition to Mr. Van Leer.

Nevertheless, I have heard far worse albums than this pretty dull album. In the big ocean of prog bands, this band is merely a sardine. This based on albums like this one.