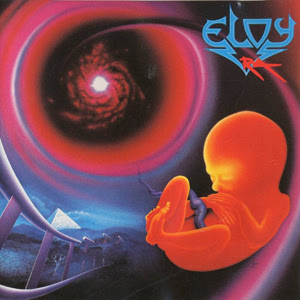 Eloy were in the middle of a really weak period in the 1980s. Their 1985 album Codename Wildgeese were a dismal affair. It was also a movie soundtrack to a B movie. It is best forgotten.

Ra shows Eloy turning more in the direction of Saga. Yes, that Canadian band who were and still is very popular in Germany. Take a bit Saga, some old Eloy and a lot of pop and rock. Then you get this album.

The end result is a pretty much watered out Eloy album. That despite of the promising art work and album cover. The drums sounds fake and ditto for the keyboards. The guitars has this traditional rock sound which is not the normal Eloy sound. Only the vocals reminds me about Eloy here.

The songs are not good at all. They are decent enough though and this album is an improvement on Codename Wildgeese. It is still an album only for their fans and even they will turn their nose up when confronted with Ra.