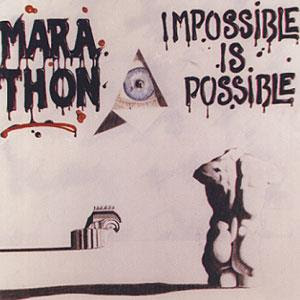 The debut album from this Italian band. A band who has released two albums.

Marathon is a splinter project of Asgard, another Italian band who so far has released five albums. Both bands played/plays neo-prog. Asgard had a more occult cinematic slant of their neo-prog than most other bands, Marathon included.

Marathon has moved much more towards the Fish era Marillion on this album. There is still some Asgard influences here. Strong ones too. There are intriguing enough, some death metal like guitars throughout this album. A forty-two minutes long album where the first half is more Marillion like than the final half.

The vocals are pretty strong here. The keyboards is good. The guitars are very metal like and the drums and bass is doing a good job too.

This is a slightly strange neo-prog album which sometimes is very Marillion like and sometimes is exploring a lot of other non neo-prog avenues. It is a mix of tradition and innovation. The end result is a good album which does not really have any greatness to offer, but still rocks a lot. Neo-prog fans should check out this album and band.