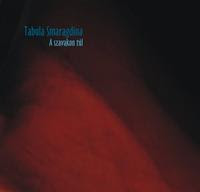 The so far only album from this Hungarian band.

Hungary has a rather good prog rock scene. They also had a couple of very good bands when they were behind the iron curtain which divided Europe into "them and us" between 1945 and roughly 1990.

In the case of Tabula Smaragdina, we are somewhere between neo prog, a bit jazz, a lot of straight rock and a bit symph prog. The male vocals are in their Magyar language. The setup is the typical guitars, keyboards, bass and drums in addition to the vocals. The bass is pretty funky and jazzy. The synths too plastic fantastic. The drums are steady and the guitars are pretty neo prog'ish. The vocals are really good too.

This fifty minutes long album is really a debut album where the band tests out various things to see what works and not works. I don't feel the world need another bland neo prog band so I would put the neo prog stuff in the bin if I was them. I would rather develop the symph prog bit and include a healthy Hungarian folk rock influence too. Those pieces works well here. Add more moog and melotron in the mix and you got a winner.

The end result is a good debut album from a band I hope we will hear a lot more from in the future.