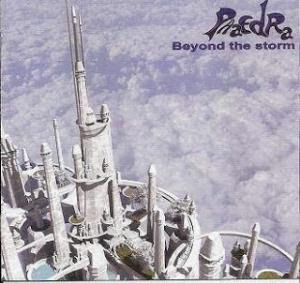 The second album from this Italian band after their rather promising Ptah album from 2010. An album who showcased a band who had yet to find their style and their comfort zone.

They have settled down a great deal on Beyond The Storm though. This one hour long album has been made with the help of keyboards, guitars, bass, drums and English vocals. All of them competently done and the very good vocals are in the Peter Gabriel vein.

The music is still a bit all over the place on this, concept album kind of an album. The music is in the Genesis vein. That is the basis for this album. They have expanded a lot into neo prog too and some instrumental prog. The music is pretty light and flowery. It is not as lush as I expect from an Italian band. A couple of great songs is also missing. There are a couple of great melody lines on this album who proves that the band are talented, but has not yet to get into full bloom.

The end result is very good album who only sporadic showcases what this band is able to do. It is an improvement from their Ptah album. But they are not yet there. Their next album will be a killer album and a classic album in this genre.