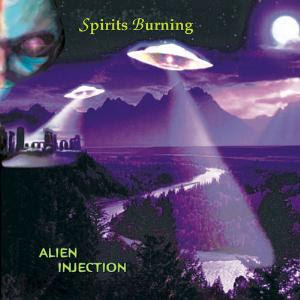 Spirits Burning is Don Falcone's project and it has released ten albums so far. Alien Injection is the fourth album. A lot of musicians has taken part in this project. The likes of Steve Wilson and Daevid Allen. But not on this album.

Spirits Burning and Don Falcone operates within the confines of the space rock genre. Not so tight confines, though. Alien Injection is as much a krautrock album as a space rock album. It meanders it's way from some bars of Beatles classic Eleanor Rigby to some weirdo pop and outright space rock trips. The music is not hardcore space rock. Neither is it commercial space rock. This is reasonable proper space rock.
References are Gong, Can and numerous space rock bands.

The music is performed with guitars, keyboards, tonnes of samples, a thumping rampant bass and drums. A few of the tracks has vocals. The sound is good.

The music is good throughout. I find it very eccentric and funny at times. The weirdo pop moments are fun. The rest of the album is a bit too orthodox space rock too really hold down my interest. This is a good album though. Get it from Black Widow records.