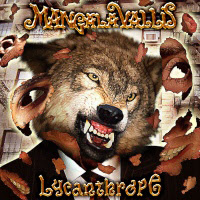 The second album from this Italian symph/neo prog band.

Their first album The Book of Dreams from 2002 was a very promising album. A promise they almost delivers on this album. Their basis is still US and British symph prog. The best reference is Spock's Beard. The vocals, sung by Bernardo Lanzetti from the 1970s great band PFM, sounds a bit like Tina Turner.  Sorry, Bernando.....  His vocals is also in English, btw. David Jackson from VdGG also helps out on saxophone. The main instruments though is keyboards, guitars, bass, drums and melotron. The result is a very good, lush sound. Sometimes, this album almost breaks into soul. Just like Spock's Beard sometimes also does.

The music is the typical neo & symph prog with a lot of dramatic vocals and music. That and some pastoral parts which is supported by a generous helping of melotrons. Mangala Vallis hits all the right notes. That also includes a couple of long guitar solos. They are not scoring high in the originality stakes, though. The music is very good though and I really enjoy parts of this album. It is a recommended album.