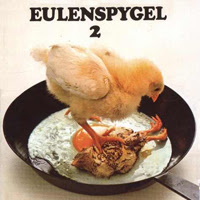 Eulenspygel was an interesting German band who released four studio albums and one live album. Their music is pretty much krautrock with a blend of space rock and blues. That and some German humour. Krautrock in other words.

The music has this classic krautrock sound with hammond organs, electric guitars, some sporadic flutes, bass, drums and German vocals. The flutes makes them sound like Jethro Tull on some songs. The basis is blues rock, though. The music is pretty meandering along during the fifty minutes this album lasts.

The quality is pretty decent throughout. I cannot say I am impressed by this album though. The songs are pretty mediocre. This album does not speak to my legs and my brain. I am afraid this album is not for me.