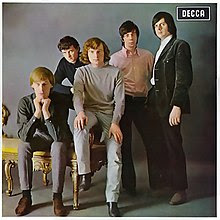 When I lived in Belfast, I sometimes enjoyed an early morning breakfast in a cafe in the more bohemian part of Belfast. I lived in that area. Van Morrison was always sitting at the corner table, reading a newspaper and eating his breakfast. He was left undisturbed and nobody pestered him. Which is why Belfast is so popular among the artists and celebs. In Belfast, you are just a normal person in one of the strangest and finest towns on this planet. I have seen Bono, Edge and other musicians in Belfast being treated as normal persons. Belfast itself is the biggest star in Belfast and nobody can compete with it. I love Belfast.

During my final two breakfasts in that cafe, Van Morrison made a point of saying hello to me. That was a massive compliment from a very private man. I said hello back and that was it. I am not a fan, but I respect him.

Belfast born Van Morrison is one of the greatest artists of today. Them was his band and I believe this is the first album he ever did in a very long career. He stayed with this band, a Belfast band, for two albums before he went solo. Them had a short career. They were highly influential though and their innovative take in rock'n'roll, soul and blues can be found everywhere in today's scene. Style wise, they were not too far away from The Rolling Stones. Add some soul (Read: Van Morrison's vocals) and flower power beat to the mix and you get Them.

The biggest hit here is Gloria. This is a song still covered by numerous other bands on albums and on stage. A good song. The rest of the album feels outdated. This is still a decent album anno 2012. It is very much worth checking out though and may give you a very good time.