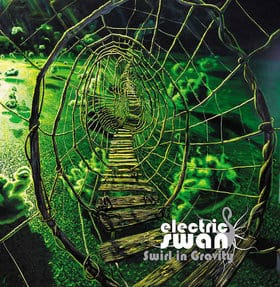 Electric Swan is a side project of the Italian band Wicked Minds and this is their debut album.

It is fair to label both Electric Swan and the album Swirl In Gravity a tribute to the old hard rock scene. Bands like Deep Purple, for example. Include Jimi Hendrix's backing band too. The 1970'ish Hammond organ sound is pretty much everywhere on Swirl In Gravity (Jon Lord, R.I.P). There is also plenty of bluesy guitars too here. Both electric and half-acoustic guitars. Monica Sardella's very powerful vocals also adds guts and power to the album. Her vocals is very good.

The music is too bluesy for my liking and the songs are really not that good. But I like the sound of the album and I admit it may have some potential in my living room. More there than in my office. Maybe as a party album. The band should really take this album on the road as it is perfect live music. I give it a weak three pointer and with the hope we will get more albums from this band.