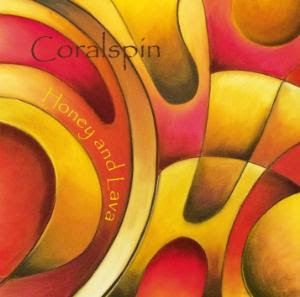 A new'ish band from the midlands area of England. I guess that means Birmingham or there about.

Both the band and other reviews lists Led Zeppelin, Queen, Muse, Gentle Giant and Genesis as the main influence on the band. I am not so sure about Led Zeppelin, but Coralspin is broadly speaking a mix of the other bands. Ellie Blyth's high pitch vocals takes some time to get used to. So does the two keyboards attack with support by guitars, bass and drums. The keyboards are pretty dominant here. Those and Ellie Blyth's vocals. That makes Coralspin stand out from the numerous other female fronted English prog/art rock bands these days. Standing out from the crowd is indeed a good idea these days.

The songs on this, their debut album, is both lush and warm. The melodies is pretty interesting and the band knows how to spice up their songs with a lot of Gentle Giant'ish twists and turns. A couple of great tracks is sorely missing though. This band does have a lot of talent though and may become a great band in the future. This album is most definate worth investigating and it is both streamed and offered for sale on the link below.