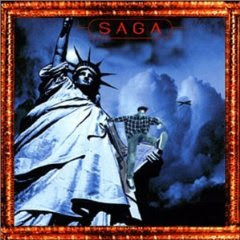 Generation 13 is a concept album. One of many concept albums around. It is about a young guy called Sam and he growing up in USA (I presume). The lyrics makes sense. The music is everywhere and feels like it has been cobbled together. We get everything from house and europop to some ballads.

I am all for concept albums. The point of a concept album is the concept. Not only the lyrics, but also the music. I am failing to see the musical concept here. The large gaps between the ballads and the cyber metal melodies on this album is too wide to be called a concept. None of the melodies are anywhere being good either. This whole concept album, supposed concept album, falls flat on it's face. With the exception of Michael Sadler's vocals, nothing of Saga can be found on this album too. This album is not for me and I find it tragic bad. And this review has been written by a man who discovered prog rock through Saga.