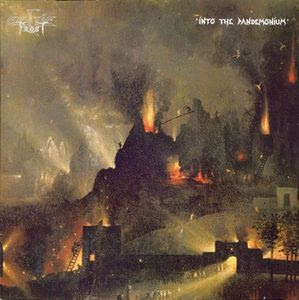 Celtic Frost is without any doubts one of the most influential metal bands ever to have been spawned. Celtic Frost was formed on the ruins of Hellhammer, a band who greatly inspired the black metal scene (together with Venom and Bathory). Celtic Frost's debut album To Mega Therion was also highly influential in that scene. However, they turned around 180 degrees on their second album, Into The Pandemonium.

Into The Pandemonium starts with a pretty Wall Of Voodoo cover called Mexican Radio. The only really straight song on this album. The album takes a very sharp turn to the left from there on and in. I bought this album back in 1987 because I thought their name sounded a bit thrash metal. I got a big shock. But I really liked this album back then although I did not really understand it. These days and with a lot more experience, I can safely describe Into The Pandemonium as a mix of RIO (Rock In Opposition), zeuhl and avant-garde metal. In fact, Into The Pandemonium is founding album of the avant-garde scene and very much reverred in the scene as that.

Listening to this album now, it is one of the albums that has stood the test of time. I actually feel it is a lot better now than back in 1987. Some metal tracks intertvined with some Aranis chamber orchestra baroque melodies. This album never get boring. The sound is a bit muddy, but that suits this mostly atonal music. The songs are great too. This is one of the strangest albums ever to be released in the metal and avant-garde scene. Celtic Frost pulled it off though and delivered a jewel. My only gripe is the lack of one or two brilliant songs. This album goes into my top 50 list.