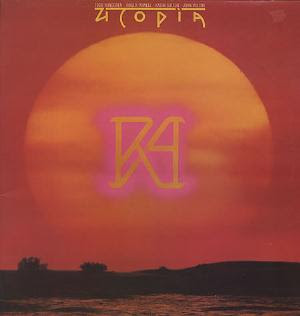 The third album from this Todd Rundgren side project.

The band is off course from the USA and I was not happy at all about their previous album Disco Jet. It was a turkey, no less. I can still hear it cluck-cluck-cluck in my turkey yard.I had hopes about this album, though.

Todd Rundgren trimmed the fat down to a four piece on Ra. Four musicians and a socalled funny voice talking in Scottish. Which is not so funny when you live in Scotland.

It is still Todd Rundgren on vocals and guitars. He got help from keyboards, drums and bass.

The music is US pop/prog/rock. The music reminds me about musicals like Hair. But it is mostly mainstream US pop/rock from that era. There is a lot of prog rock here too. But that is not so easy to detect in this bland music. All the one hour of it.

This blandness is infused with some attempts at funny spoken words and some funny melody lines. And the music is not too bad either. There is no great tracks here though and I am not too pleased about this sound and music I am not that fond of. US pop/rock is not high on my list of music genres I enjoy.

Utopia is for me another word for frustrations. Their debut album is great. This album is not. It is a decent to good album. I think I have now got my fill of Utopia and will explore other avenues instead.