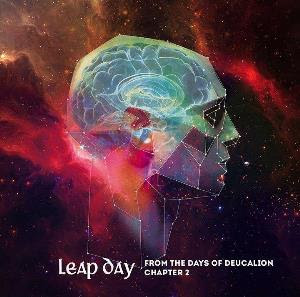 The fourth album from this Dutch band.

Leap Day is a five piece band with a line up of keyboards, bass, drums, guitars and vocals.

This is # 2 of the From The Days Of Deucalion. I really loved # 1 of this series and gave it a great rating, 4 points. I was therefore really looking forward to this album.

The vocals from Jos Harteveld is really great and gives the opening song, after the brief three minutes long interlude, Amathia a great vibe.

From there on, there is not that much happening. The music is very pedestrian and pastoral. Almost too modest at times. It is really an album where the sound speaks more than the songs.

There are some glimpses of greatness here and there on this one hour long album. Most songs are a bit on the short side and a long suite would had been preferable to these short themes and songs. Short and short..... Five to six minutes long songs is a bit too short.

Jos Harteveld is really carrying this album. An album which only sporadic shows flashes of greatness. I am slightly disappointed although I really like this album a lot. Hence my rating.