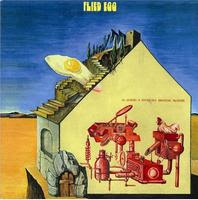 Flied Egg was three Japanese musicians who played drums, bass, keyboards, guitars and did the vocals. English vocals with one exception. That song was in Japanese.

I expected a bit of a Gong like album here. And it starts out in that vein too. The title track, by far the best song here, is a bit Gong'ish.

Then the album continues into a mix of The Beatles, Moody Blues and all forms of rock possible. Even heavy rock. Then you also get some late 1960s pop tunes. Like for example the six minutes long and pretty charming Plastic Fantasy.

The rest of the album is a bit of a let down. It is a bit eccentric. But it is also copying the good and the very bad things from the late 1960s and early 1970s. You even get some Deep Purple like stuff here.

I understand that Japan was pretty hungry for western music and bands and albums like this was necessary and a good thing. But anno 2016....... It is at times charming. But the standard is not good, to say at least. Hence my rating of this album.