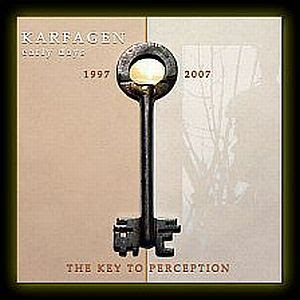 The third album from this Ukraine based project.

Karfagen is Antony Kalugin and his synths and programming.

There is not much I know about who has the honour to do the female vocals. But there is a lot of female vocals and I don't think it is the masculine man Antony Kalugin's vocals. If that was the case, I think a lot of bands would pay him a small fortune get the software he has used here.........

The music here is mostly instrumental with some female vocals in some proper songs. This album is very long. Two and a half hour on two CDs which has been filled to the max. You get full value from Antony Kalugin and the Welsh record label Caerllysi Music who has brought his music to the rest of t the world. For this, Caerllysi Music deserves a lot of praise. Praise hereby given.

A mad professor from the ex USSR countries and his synths........... Well, it is not exactly something that makes me become joyfull and in a good mood. And I have approached Karfagen with a lot of apprehension too.

In the case of The Key To Perception, my apprehension has been misplaced and I have been very pleasantly surprised.

The music is a mix of Ukraine folk rock dominated melodies and more modern music. Some of the melodies here are superb. The opening 20 minutes of this album is superb. And the first CD is really great to superb. The second CD also has some great stuff too. The far too few songs with female vocals is really great too.

My overall verdict on this album is that this is one of the best ever albums to come out of Ukraine and Antony Kalugin's crowning glory. It is indeed a great album and I really love it.

A mad professor and his synths........ Sometimes that works out very well. In particular when this mad professor is Antony Kalugin.