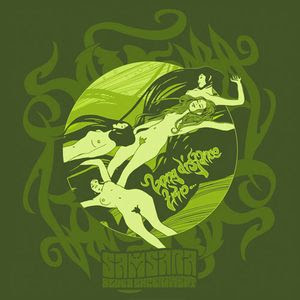 I wonder if this quartet gets any invites to the many blues festivals around Europe. If that case, the blues crowd is in for a big shock.

This quartet with a lineup of guitars, bass, drums, sitar, organ, synths and vocals is nowhere near being a blues combo. This band plays music dirtier than the muddy Mississippi river. There is more mud in their music than water. And that is not mud as in delta blues.

It has to be said that a couple of the more melodic stuff here makes a detour into delta blues. But I take it as a bit of a joke from the band.

The music is not blues. It is very muddy space rock. Dark as tarmac and very dirty. This one hour long album also have some melodic stuff. But most of this album is guitar walls followed by guitar walls. Post rock is another influence on this album too. But Black Sabbath is the biggest reference here.

The result is dirt and mud. The sound is as dark as it should be for a record like this. The vocals are bluesy growling. They are pretty much overrun by the guitars here so the vocals is taking a backseat.

The lack of any really great or even good songs is the main problem with this album. It is nevertheless a decent to good album. Check it out.