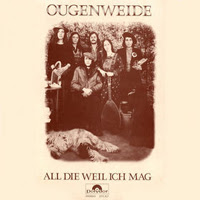 Ougenweide was pretty popular in Germany back in the 1970s. I reviewed their debut album four years ago for this blog and quite liked it.

Ougenweide was a sextet with lots of acoustic instruments, woodwinds, guitars, bass, flutes, percussion and German vocals. Both male and female vocals. They were singing in old German.

Their music is essentially folk music. But with some classical music and rock influences. Their music was though in essence medieval folk music.

The female vocals are great and the male vocals OK. The music is not as primitive folk music as I feared. The mix of ballads and more faster songs are pretty good here.

This album is forty minutes long and some of the songs are touching seven minutes. I have to admit there is not enough instruments here and far too much vocals for my liking. There are a couple of good songs here.

This album is what I would label as a decent enough album. It is not my cup of tea. Folk rock fans should really get this album and everything else by this band.