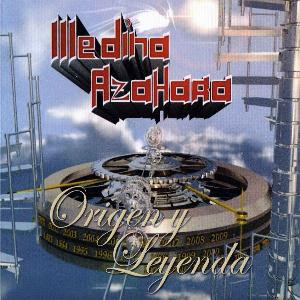 The fifteenth album from this Spanish band.

Medina Azahara, who shot to fame in the 1970s, is still releasing albums, strangely enough. That is a good thing, though.

The band was a no-nonsense five piece band on this album. That is guitars, bass, drums, keyboards and vocals. A bit stripped down.... on paper, at least.

The band has followed the times and has gone back to a much more ethnic sound. Ethnic as in Spanish and Arabic. The music here reminds me a lot about the couple of Arabic music leaning albums they released in the 1970s.

Spain is a country with a great Arabic and Muslim history. Both in culture and the architecture. I therefore understand their more Arabic culture leaning music.

Spanish culture and a great deal of Western rock'n'roll and pop music is still the basis here. The music is a bit of a mix of power ballads and hard rock. You get a lot of leather trousers here. I have seen some picture of this band in a live setting and they are still strutting around as it was the late 1980s. Which is not a bad thing. This is Medina Azahara and they are a proud band with their own sound.

I am not overly happy about their music though as it feels a bit dated and is not that good. But I like this ethnic slant on this one hour long album. An album I would rate somewhere between decent and good. There is still life in this band.