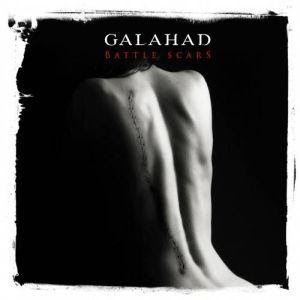 I was listening a lot to their 2007 epos Empires Never Last when it was released but never got around to review it. So Battle Scars is my first ever review of a Galahad album. I will go back to their other albums too and review them in the coming months and years.

Battle Scars is the first of their two 2012 albums. It is supposed to be the bleak one this year and the black/white cover art work alludes to that. The music is not that bleak though. It is neo-prog with a modern, techno upgrade. The music is very commercial and catchy. It is also an album with a longviety. It is an album which engage and gets the blood pumping to and from the listener's heart. The modern techno bits will enrage some who believes in the purity of progressive rock. Purity from the commercial Rihanna like music scene these days. And yes, I am provoked by parts of this album. The closing track Seize The Day is a two fingers salute or even a one fingers eff off signal to the prog rock purists. The two fingers salute is used pretty regular throughout this album. This is an album which reaches out to the Muse and the commercial rock audience. Add a one million dollars marketing budget and Battle Scars would be a platinum selling album.

The music is hard and the rhythms is being thumped out as in a Rihanna gig. Or make that; a Muse gig. Inbetween these unfamiliar rhythm patterns, there are some very good songs here too. Singularity sounds like the good old Galahad and is a very good song. The title track is also a very good song. The offending song Seize The Day is.....ehem.... well, offensive. Let me put it like that.

Battle Scars is an engaging album and I feel my heart has done a good job by pumping around all this blood to and from my face. Battle Scars is a very good album though from a band who has taken a big risk and almost pulled it off. I will give the rest of their discography a spin later on.