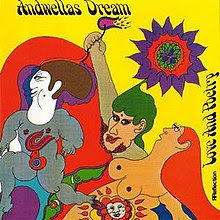 An unknown band from Northern Ireland with their one and only album.

Andwellas Dream operated in the Belfast scene at the same time as Them, Van Morrisson's first band. It was fronted by Dave Lewis, a highly talented young man. He released a solo album and wrote the Happy to Be an Island in the Sun hit song for Demis Roussos. That was the last sign of life from  Dave Lewis. Which is a great shame because this album showcases a very big talent.

The year was 1969 and the music world is still reeling from the shock Sgt Peppers gave it. Love And Poetry is very much in the blues and psychedelia. Some would even call the music on this album for proto-prog. It certainly has a lot of progressive elements. It is also very swinging with the rampant John Lord like keyboard which leads the way. That and the excellent vocals. But psychedelia is most definate the label this album should get. The music is still loosely based on verse-chorus-verse. The average song lenght is around the four minutes mark.

There is one great song on this album and it is the hymn like Lost A Number Found A King. The rest of this album is also very good. Not everything here is great or even good. But it is still a very good album. This is an album which is impossible to get these days but which is overdue a CD or a digital copy release. It will surely be a hit if re-released as it sold next to nothing when it was released back in 1969. All the songs on this album can be found on Youtube though. Love And Poetry is a true hidden gem which deserve a second chance.