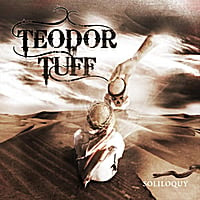 The second album from this Norwegian band and the hype machines goes overdrive.

Their first album was heavy influenced by Deep Purple and Whitesnake, according to their homepage. Their new album Soliloquy has both legs firmly planted in the power metal genre though. Power metal cliches follows each other like the wagons follows the locomotive in a train. The typical power metal sound, vocals, guitars, drums and bass. Nothing here is new.

I have to admit I don't like power metal at all and I am the wrong person to review this promo album. Unfortunate, this is a personal blog and I have to express an opinion. There is no great songs on this album. Just a lot of songs which makes a lot of noise, but no sense. The guitars are good though and this is a decent album. But despite of the hypes declaring this album as one of the best albums of all time, I find nothing good about it.