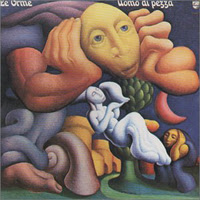 Le Orme is rightly regarded as one of the best Italian progressive rock bands of all time and is still active in the scene. Their second album Collage (see review) was largely an ELP copycat album. They have moved on and developed their sound and songs a lot on Uomo Di Pezza though. The music has become a lot more complex and eclectic. The likes of Gentle Giant has very much influenced this album and far more than ELP has influenced the music here. The same also goes for Italian folk music which is incorporated into the sound on Uomo Di Pezza.

Where Collage was naive and borrowed, Uomo Di Pezza is a fully bodied album where the band stamps their authority on it. The church organs is still there and so is the vocals, flutes, bass, drums and guitars from Collage. The differences is the complexity of the songs. Layers upon layers of complex melodies has been added. The result is not as immediate and straight in the face as Collage. Uomo Di Pezza requires a lot of time.

The result is a great album which really impresses me from the first to the final minute. It is also almost a blueprint for the Italian prog rock scene too. This is a highly enjoyable album.