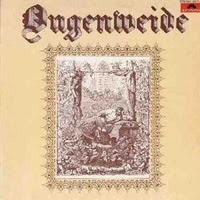 The debut album from this German folk rock band.

The band was formed to play medieval folk music. The type of music played in bars and in other public places centuries ago. Ougenweide is slightly electrified though. But the instruments are guitars, bass, drums and congas. Pretty simple and effective.
On the top of the music, you got both female and male vocals. Both very good vocals. The sound is also very good.

The music is pretty basic folk music and the quality of the material very decent. But besides of the vocals, the music itself never becomes interesting. It is a nice mix of ballads and more racy music. But never intersting and taxing on the brain.

This is a decent album from a band who released a lot of albums. I hope the other albums is better than this album, though.