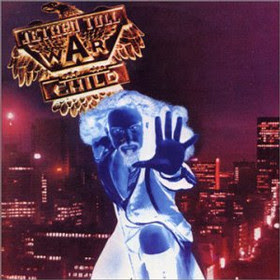 This is Jethro Tull's seventh studio album and is the follow up to the three superb albums Aqualong, Thick As A Brick and A Passion Play.

The opening song War Child very much follows the follows in the footsteps of the three above mentioned albums. That is the best song of this album though. The songs on this album is on the rather short side, averaging three and a half minutes long. But the style is very much as on their best albums. That is an intricate, baroque blend of folk rock and eclectic rock. Ian Anderson's vocals is in the forefront of the mix and dominating the songs. The same goes for his flute too. This album is arch-typical Jethro Tull and a good reason why this band is so much loved.

As mentioned above, the best song is the title track. The rest of the material has some flashes of brilliance, but never really offers up any great songs. Some of the music is also pretty poppy and banal light hearted. This album is not one of the best Jethro Tull albums. But it is still an album I as an admirer of this band really appreciate. But I cannot overlook it's shortcomings.