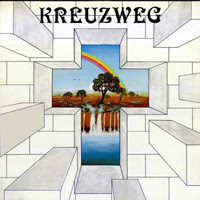 An obscure German band who released only this album and then disappeared without a trace.

Their music can best described as piano & vocals based epic rock. There are also some electric guitars, woodwinds and synths here. The music is mid-tempo and not particular symphonic or even multi-dimentional. The music sticks to it's narrow formula. There are also some krautrock influences in their music. Mostly from the likes of Grobschnitt which is the only reference I would use on this album and the band.