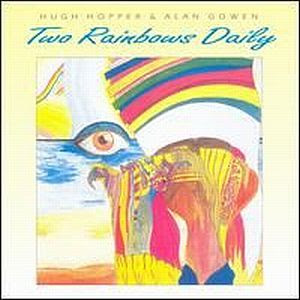 Hugh Hopper was an ex member, founding member, of Soft Machine and later Soft Machine Legacy before he sadly passed away in 2009. He also released a lot of solo albums plus took part in a lot of other projects.

I have previously reviewed Hopper Tunity Box from 1976 which I really liked. So I was really looking forward to sink my ears into this album. An album made a lot more interesting by the appearance of another one of my favourite musicians; Alan Gowen. He sadly passed away on the 17. May 1981 after a battle with leukemia. A terrible disease which robbed us of one of the best keyboardists and composers we have ever seen in the age of approx 30 years old.

This album is very much a cooperation between Hopper's bass and Gowen's keyboards. There are some percussions and drums here too. But the bass and the keyboards is the main instruments. This album is a duo between those two instruments.

The result is a very, very stripped down album which does not offer up any really big fireworks. The music is subtle to say at least. It is not easy listening too and I have been struggling like mad with this album from these two giants in my music world.

I have started to like this album though although it will never get much airplay in my house after this. It is simply one too demanding album for me. It is too avant-garde too. I give a weak good rating as I understand where Hugh and Alan comes from here. I am not a big fan of this album, though.