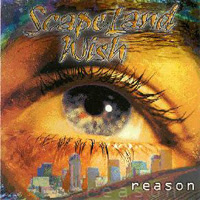 The debut album from this US band who has so far released only two albums.

The always very informative and trustworthy Progarchives has put this band in the neo-prog genre. Which I am not disputing that much.

US neo-prog is a different beast than the UK version of neo-prog. Scapeland Wish from Connecticut has obviously been listening to a lot of AOR and Crosby, Stills & Nash in addition to the likes of IQ and Marillion. I would also add Rush here.

This three piece band has had help from three other vocalists in addition to the lead vocals they have been providing themselves. There is a lot of vocal harmonies here. The lineup is the usual keyboards, guitars, drums, bass and vocals.

Harmonies is the main feature here. Both vocal harmonies and all kinds of other harmonies. The music is neither hard or soft. It is....... well, harmonious. Very harmonious in fact. The vocals is very good and ditto for the instruments. The songs are not too bad on this one hour long and the album is at times a sheer listening pleasure.

The music is also very complex at times with some fusion and pop influences too. Most of all, this a prog/art rock album from USA.

The end result is a good album which should please anyone into gentle harmonious progressive rock.