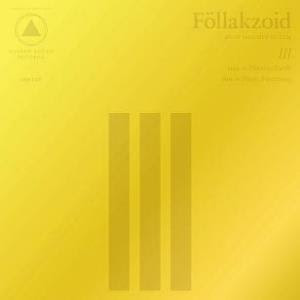 The third album from this Chile based band.

Follakzoid is a four piece band in the space rock genre. Their lineup is bass, drums, guitar and synths.

I have been very pleased with their previous two albums. Both of them were solid space rock and zeuhl albums. Just down my alley, both of them.

III takes the band in a different direction again. To the heartlands of Germany. To the krautrock genre. Well, the space rock end of the krautrock spectrum. The music on this forty-five minutes long album, four compositions is bass and drums driven with some guitars and synths on the top of that. Mostly, the bass is doing the melody lines. There are some sporadic outbreaks of guitars and synths wall of sound. Darkness and lights. These contrasts works very well here.

The word is "minimalism" and this actually works on this album. All four compositions is good and I am quite enjoying this album. Fans of krautrock should really get this album. Even I rates this album.