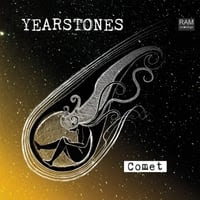 This band hails from Fitjar on the west coast of Norway and from the same area as D'AccorD. That band is one of the best Norwegian prog bands at the moment. Yearstones shares vocalist with D'AccorD. Vocals which is very distinct. I guessed Mr. Årstein Tislevoll after the first tones of this album and I was spot on. His vocals is very 1970s and so is the Hammond organ on this album. Those two are helped by drums, guitars and bass.

D'accorD is a good reference when it comes to the music on this album. Yearstones sounds as the 1970s distilled down to one band. A bit funk, a bit hard rock, a lot symph prog rock, a bit space rock, a bit rock, a bit krautrock and a bit pop. Everything with a 1970s sound.

This album is also blessed with some great songs too. Not many, but enough to keep it interesting throughout. Yes, it is an unrepentant retro-rock album. I really like the Hammond organ and the vocals here. There are not enough great stuff on this album though. But this is still a very good album well worth checking out.