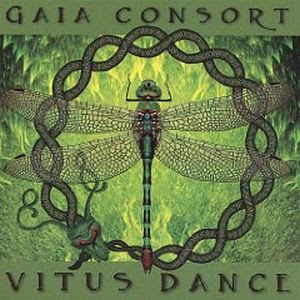 The fourth album from this US folk rock band.

Although folk rock in USA means something entirely different than folk rock in UK and Ireland. Gaia Consort's folk rock has taken some influences from Jethro Tull and a lot of influences from what is now called Americana. That is another word for US folk rock. The likes of bluegrass, country'n'western, gospel and blues. In this case, country'n'western and blues. On the top of that, you got what we can call the modern US folk rock; AOR. In UK and Ireland; folk rock means a lot of celtic rock and shanty songs.

Vitus Dance is one hour with a mix of UK folk rock, US folk rock and a lot of standard US rock. The kind of John Cougar Mellencamp and Bob Seger. There is also some AOR here. This album does not have a slick AOR production though. It still retains plenty of folk rock sound and I would label Vitus Dance as a US folk rock album. Which is different from UK and Ireland folk rock. You got me ?

The result is a good, warm album who unfortunate is missing a killer track or two. A track or two who would had set it apart from other albums in this genre. Besides of that, it is an album well worth checking out.