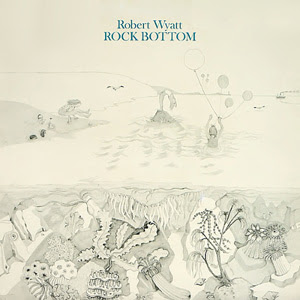 The second album from Robert Wyatt, a national treasure here in UK. Rightfully so.

The history behind this album is tragic. Having left Soft Machine and then establishing the rather successful Matching Mole, Robert Wyatt then falls out of a window during a party and becomes paraplegic, unable to play his drums.

Robert's voice is still alive though and ditto for his ability to write great music. He now carved out a successful career as a song writer and recording artist with these abilities. Rock Bottom is the first of these albums. An album which opens with the brilliant six and a half minutes long Sea Song. This haunting song alone is worth the whole purchase of this album. It also sets the tone for the rest of the album which is haunting personal, coming with grips with his new life as paraplegic.

The result is one of the great album where Robert were helped by the likes of Mike Oldfield and Richard Sinclair. But most of all; this is Robert Wyatt's album. A very personal album which is also a good jazz album too where Robert paints some sound collages which sounds very personal. Not to mention; great.

Rock Bottom is an iconic album and one that leaves impressions. It is maybe not a fully fledged masterpiece. It is still one well worth checking out. An album which is bound to impress you.