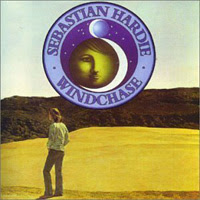 The final album of this Australian band's two legendary 1970s albums. I really liked their first album Four Moments and was looking forward to hear this album.

Sebastian Hardie played and probably still plays (on their new album) symphonic prog with emphasis on long compositions. Their sound is a local version of the English symph prog sound from the other side of the planet. Sebastian Hardie very much had their own sound, though. A sound also incorporating fusion and jazz too.

The music is performed with mellotron, keyboards, guitars, bass and drums. There are also some vocals here. This album starts with the long and lingering hymn like title track. A twenty minutes long track where the first three quarters Camel like music are good and the final five minutes are great in it's crescendo like final act. Altogether a great track. The four shorter compositions, which forms the other half of this album, is pretty good too. The title track though is the best composition here.

This album is a very good symph prog album from a band who was too short lived, but still make a pretty big impression on the scene. They were no doubts the best prog band to come out of down under in the 1970s. The legend status of this album is almost deserved too.